Empire series and Riftwar being adapted for TV by Six Studios!

I can finally make it public, announced today: 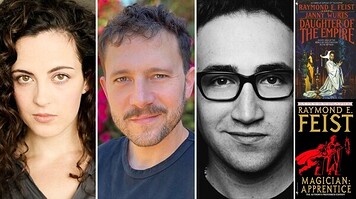 ‘The Riftwar Cycle’: TV Series Adaptation Of Fantasy Books In Works At Newly...

The Empire Trilogy was my gateway from teenage Feist reading to Wars of Light and Shadows. This is a perfect time for the news too with Song of the Mysteries aiming for publication – maybe it will drive new readers to explore your other solo books!

Sounds like they have a lot of talent on that team. Looking forward to seeing how it turns out!

That’s such great news, I’m really enjoying the recent adaptations of SF, the screenwriters seem to be really getting these beloved worlds across properly and with respect.
It bodes well for WoLaS to get picked up too. So much in those books, enough for many seasons, though of course, being forever young looking is tricky to enact, the CGI is getting better.
Woot!

This is so exciting!! I never thought it would happen because of the language difference between Kelewan and Midkemia. I thought production companies would be too scared to do a show with subtitles for a big part of it. However times have really changed. Fantastic news.
BTW I just signed up for an account. I used to post ages ago and I have changed computers and emails several times and lost track of my username and password etc. but I have been hanging out for every book in the WOLAS as well.
Who wants to have fun discussing casting ideas??? I always thought of Pug as being a bit like Matthew Broderick from the movie Lady Hawke - but less talkative. Mara could be a really interesting casting challenge. I wonder if they will opt to have Kelewan characters all Asian background actors as there were some hints of Asian cultural influence in the books. But they also have options like using all black actors. It would be pretty awesome if they made Midkemia all black actors instead to challenge assumptions. However if both worlds have a mixture of races that would be best perhaps. I kind of see Mara being Native American for some reason. OMG we are going to see Elvandar on tv!! I hope the CGI ChoJa live up to expectations. The Emporor - who could play the Emperor?? All the beloved characters… I have so many pictures in my head from reading the Empire Series so many times. BTW when I first read Daughter I thought Mara was going to have a romance with Lujan. It took me a while to get invested in Kevin. I loved how he changed the minds of the Choja though. Gee I hope I remembered all the spelling correctly.
I haven’t read Dune or Foundation but I really liked the recent adaptations of them. Now I wonder if I will react as well if they leave out something I am attached to. However I have done okay when watching adaptations of Jane Austen books so, should be right. Ok, sorry for rambling on. YAY for the great news!!